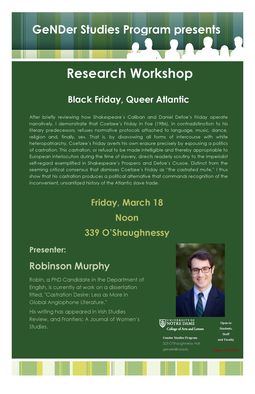 After briefly reviewing how Shakespeare’s Caliban and Daniel Defoe’s Friday operate narratively, I demonstrate that Coetzee’s Friday in Foe (1986), in contradistinction to his literary predecessors, refuses normative protocols attached to language, music, dance, religion and, finally, sex. That is, by disavowing all forms of intercourse with white heteropatriarchy, Coetzee’s Friday averts his own erasure precisely by espousing a politics of castration. This castration, or refusal to be made intelligible and thereby appropriable to European interlocutors during the time of slavery, directs readerly scrutiny to the imperialist self-regard exemplified in Shakespeare’s Prospero and Defoe’s Crusoe. Distinct from the seeming critical consensus that dismisses Coetzee’s Friday as “the castrated mute,” I thus show that his castration produces a political alternative that commands recognition of the inconvenient, unsanitized history of the Atlantic slave trade.

Robin, a PhD Candidate in the Department of English, is currently at work on a dissertation titled, "Castration Desire: Less as More in Global Anglophone Literature." His writing has appeared in Irish Studies Review, and Frontiers: A Journal of Women’s Studies.