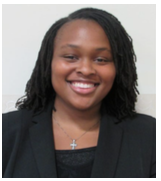 While comic adaptations today are often instantly successful, they are not being held accountable for accurately adapting the race and gender diversity in comics to their screen-based mediums.  I argue that this inaccurate adaptation correlates to a representation of static characters without representation of the fullness of their identity.  Black women have been denied this representation for hundreds of years; however, Hollywood has recently started racebending the love interests of favorite white male characters like Spider-Man and The Flash.  While studios are under the impression that this brings the necessary diversity to their casts, the racebending of these characters actually does further damage in its propagation of the stereotype of black women as solely objects of white male desire and possession. I offer an adaptation of a powerful black super heroine such as Vixen as an alternative to Hollywood’s attachment to static objectified black female characters.

Chamara Moore is a second-year Ph.D. student in the Department of English, a Graduate Minor student in Gender Studies and Screen Cultures at the University of Notre Dame. Her primary research interests are oriented towards Black Feminist theory, Intersectionality, 20th Century African-American Literature, and Media Studies—particularly the misogynoir present in films, TV, and comics.