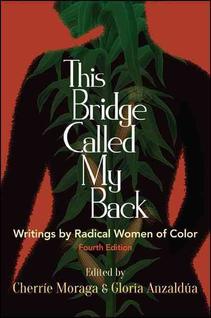 Sponsored by the Genevieve D. Willis Endowment for Excellence

Updated and expanded edition of the foundational text of women of color feminism.

Originally released in 1981, This Bridge Called My Back is a testimony to women of color feminism as it emerged in the last quarter of the twentieth century. Through personal essays, criticism, interviews, testimonials, poetry, and visual art, the collection explores, as coeditor Cherríe Moraga writes, “the complex confluence of identities—race, class, gender, and sexuality—systemic to women of color oppression and liberation.”

Reissued here, nearly thirty-five years after its inception, the fourth edition contains an extensive new introduction by Moraga, along with a previously unpublished statement by Gloria Anzaldúa. The new edition also includes visual artists whose work was produced during the same period as Bridge, including Betye Saar, Ana Mendieta, and Yolanda López, as well as current contributor biographies. Bridge continues to reflect an evolving definition of feminism, one that can effectively adapt to, and help inform an understanding of the changing economic and social conditions of women of color in the United States and throughout the world.

“These essays and poems do more than just revisit the hopes, fears, frustrations, and accomplishments of women of color circa 1981; they also shed light on concerns women continue to face today … There are lines of poetry here sure to stir the imagination and connect with all ages, races, and genders … This Bridge Called My Back deserves to be picked up by a new generation of radical women.” — ForeWord Reviews

“Immense is my admiration for the ongoing dialogue and discourse on feminism, Indigenous feminism, the defining discussions in women of color movements and the broader movement. I have loved this book for thirty years, and am so pleased we have returned with our stories, words, and attributes to the growing and resilient movement.” — Winona LaDuke (Anishinaabe), Executive Director, Honor the Earth
~SUNY Press