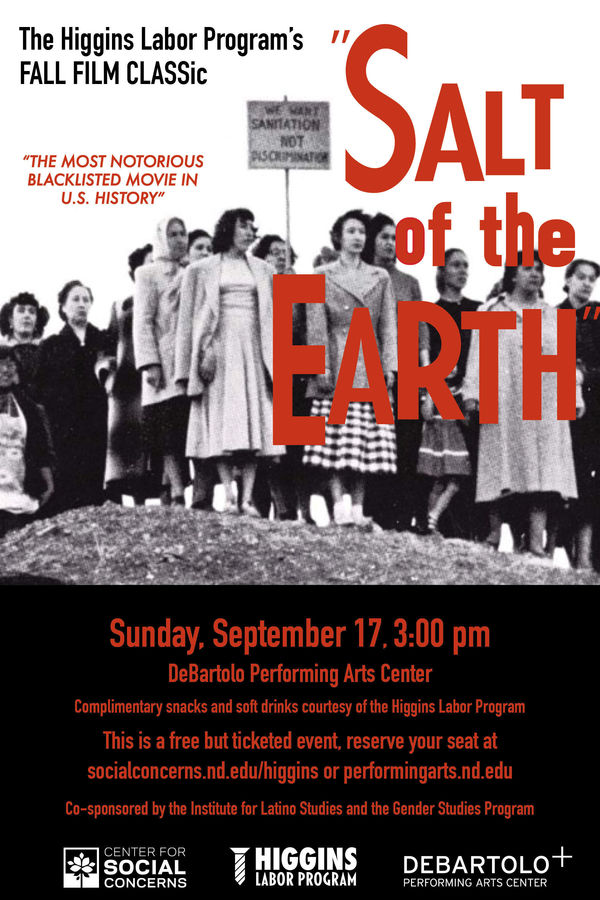 The Labor Question goes to the movies in our ongoing partnership with the DeBartolo Performing Arts Center.

The FILM CLASSics series features important films -- usually one per semester -- that probe questions of work, class, economics, identity, politics, daily life, and solidarity. Whether old or new, celebrated or obscure, famous or forgotten, these titles merit presentations in a social setting and on a big screen.

For Fall 2017, we are excited to screen the most notorious blacklisted movie in US history:

S​alt of the Earth
(1954; directed by Herbert Biberman)

Released in 1954, this Cold War labor classic provides a fascinating -- and more labor-friendly -- counterpart to On the Waterfront (the Oscar winner for best picture that year). Recreating an actual 1951 strike by Mexican-American zinc miners, the film is noteworthy on several counts: it was made by a film crew blacklisted by the Hollywood studios, it starred real workers and their families as characters, and it engaged in questions not only about unions and labor rights but gender equality in the household [Watch the original trailer.].

Co-sponsored by the Institute for Latino Studies and the Gender Studies Program, the screening will be followed by an open audience discussion.

RVSP for this free but ticketed event and come early for complimentary free snacks and soft drinks, courtesy of the Higgins Labor Program and our cosponsors!