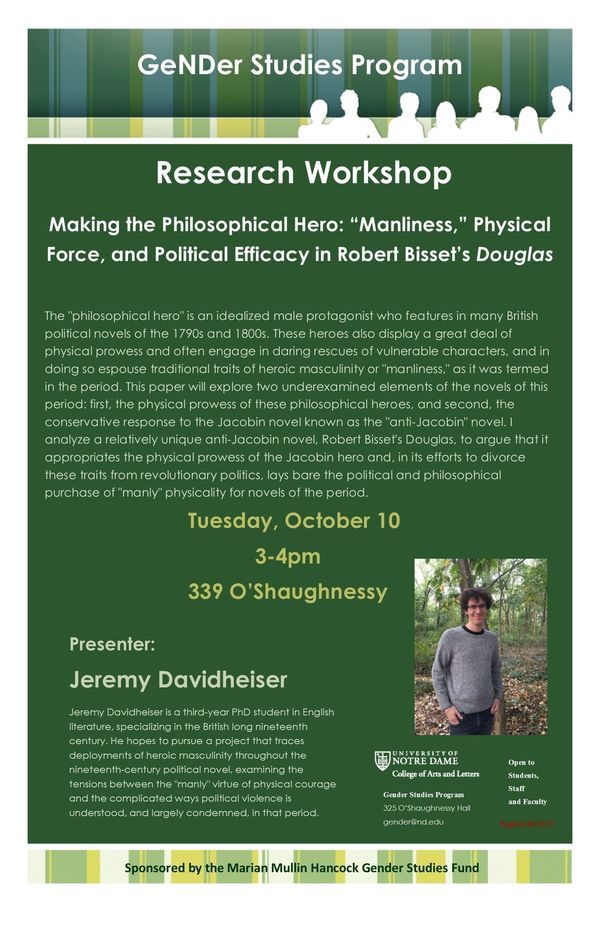 The "philosophical hero" is an idealized male protagonist who features in many British political novels of the 1790s and 1800s. This period, known as the era of the "Revolution Debate," was characterized by the polarized response in British letters to the French Revolution and its violent aftermath. Many of the more well-known novels of this time are classified as "Jacobin" novels for their support of the democratic principles that guided the French Revolution, and their heroes are idealized rebels who articulate these democratic principles against the narrow-minded prejudices of many of the secondary characters. These heroes also display a great deal of physical prowess and often engage in daring rescues of vulnerable characters, and in doing so espouse traditional traits of heroic masculinity or "manliness," as it was termed in the period.

Jeremy Davidheiser is a third-year PhD student in English literature, specializing in the British long nineteenth century. He hopes to pursue a project that traces deployments of heroic masculinity throughout the nineteenth-century political novel, examining the tensions between the "manly" virtue of physical courage and the complicated ways political violence is understood, and largely condemned, in that period. His other interests include the history of warfare, empire, and the intersections between propaganda and literature in the nineteenth century.