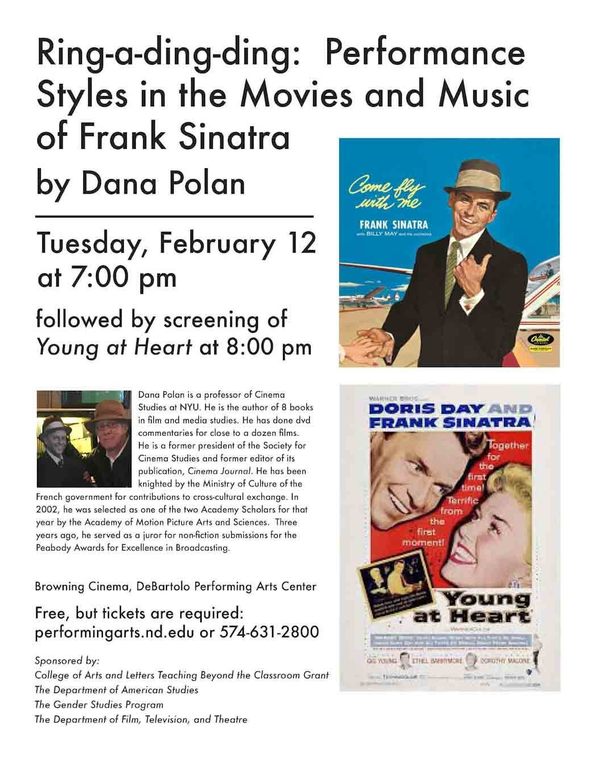 Dana Polan is a professor of Cinema  Studies at NYU. He is the author of 8 books in film and media studies. He has done dvd commentaries for close to a dozen films.

He is a former president of the Society for Cinema Studies and former editor of its publication, Cinema Journal. He has been knighted by the Ministry of Culture of the

French government for contributions to cross-cultural exchange. In 2002, he was selected as one of the two Academy Scholars for that year by the Academy of Motion Picture Arts and Sciences. Three years ago, he served as a juror for non-fiction submissions for the Peabody Awards for Excellence in Broadcasting.

Screening of Young at Heart will follow at 8:00 pm
Free, but tickets are required:
Performingarts.nd.edu or 574-631-2800
RESERVE TICKETS

A remake of Four Daughters (downsized to three in this version), this musical began the collaborations between Frank Sinatra and director Gordon Douglas. Following the map from Four Daughters, a widowed musician is the father of a trio of extraordinarily gifted daughters, Laurie (Doris Day), Fran (Dorothy Malone) and Amy (Elisabeth Fraser), all of whom are facing different romantic troubles. The arrival of two handsome musicians, Alex Burke (Gig Young) and Barney Sloan (Frank Sinatra), who have been invited by Gregory to board at the house while working on a new musical, further complicates the daughters' love lives.