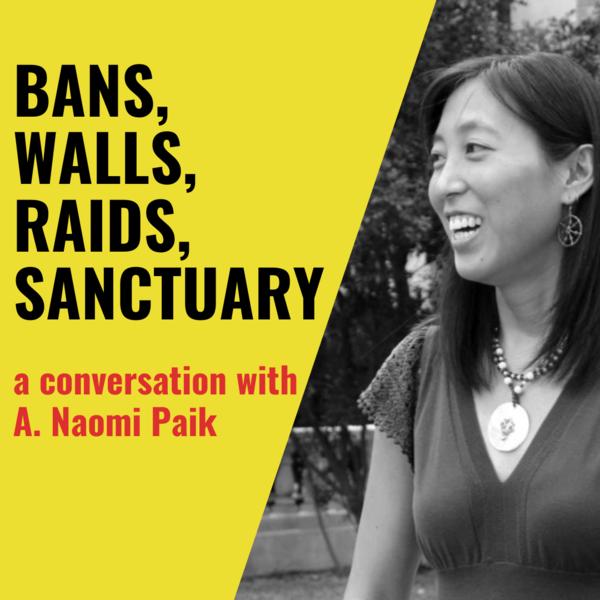 Join the Gender Studies Program and the Department of American Studies for a conversation with A. Naomi Paik, author of Bans, Walls, Raids, Sanctuary: Understanding U.S. Immigration for the Twenty-First Century.

No advance reading is required!

Professor Paik's talk will be followed by a Q&A session.

Days after taking the White House, Donald Trump signed three executive orders—these authorized the Muslim Ban, the border wall, and ICE raids. These orders would define his administration’s approach toward noncitizens. An essential primer on how we got here, Bans, Walls, Raids, Sanctuary shows that such barriers to immigration are embedded in the very foundation of the United States. A. Naomi Paik reveals that the forty-fifth president’s xenophobic, racist, ableist, patriarchal ascendancy is no aberration, but the consequence of two centuries of U.S. political, economic, and social culture. She deftly demonstrates that attacks against migrants are tightly bound to assaults against women, people of color, workers, ill and disabled people, and queer and gender nonconforming people. Against this history of barriers and assaults, Bans, Walls, Raids, Sanctuary mounts a rallying cry for a broad-based, abolitionist sanctuary movement for all.

Register to attend this event.

All who register will receive a Zoom link via email.

Her book Bans, Walls, Raids, Sanctuary: Understanding U.S. Immigration for the 21st Century examines the long-developing criminalization of foreign-born people in the United States and the need for radical, abolitionist approaches to sanctuary.

She is currently working on a book-length manuscript on the most capacious meaning of “sanctuary for all” and developing another on military  outsourcing.

As a board member of the Radical History Review, she has co-edited three special issues of the journal—on “Militarism and Capitalism" (Winter 2019), “Radical Histories of Sanctuary” (Fall 2019), and “Policing, Justice, and the Radical Imagination” (Spring 2020). She has published articles in Social Text, Radical History Review, Cultural Dynamics, Race & Class, e-misferica, Humanity, The Conversation, The Funambulist, and the collection Guantánamo and American Empire.

She is the IPRH-Mellon fellow in Legal Humanities (2019-2022), working to build the legal humanities at the University of Illinois, Urbana-Champaign. With Toby Beauchamp, she is organizing a series of events on "Abolition" as a Resident Associate of the Center for Advanced Study (2019-present). Her research and teaching interests include comparative ethnic studies; U.S. imperialism; U.S. militarism; social and cultural  approaches to legal studies; transnational and women of color feminisms; carceral spaces; and labor, race, and migration.