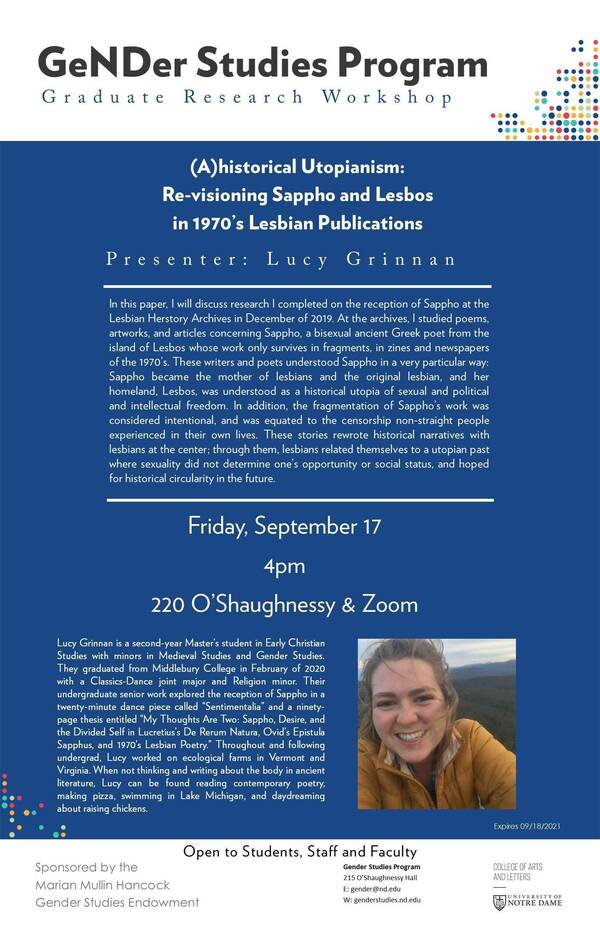 In this paper, I will discuss research I completed on the reception of Sappho at the Lesbian Herstory Archives in December of 2019. At the archives, I studied poems, artworks, and articles concerning Sappho, a bisexual ancient Greek poet from the island of Lesbos whose work only survives in fragments, in zines and newspapers of the 1970’s. These writers and poets understood Sappho in a very particular way: Sappho became the mother of lesbians and the original lesbian, and her homeland, Lesbos, was understood as a historical utopia of sexual and political and intellectual freedom. In addition, the fragmentation of Sappho’s work was considered intentional, and was equated to the censorship non-straight people experienced in their own lives. These stories rewrote historical narratives with lesbians at the center; through them, lesbians related themselves to a utopian past where sexuality did not determine one’s opportunity or social status, and hoped for historical circularity in the future.

Lucy Grinnan is a second-year Master’s student in Early Christian Studies with minors in Medieval Studies and Gender Studies. They graduated from Middlebury College in February of 2020 with a Classics-Dance joint major and Religion minor. Their undergraduate senior work explored the reception of Sappho in a twenty-minute dance piece called “Sentimentalia” and a ninety-page thesis entitled “My Thoughts Are Two: Sappho, Desire, and the Divided Self in Lucretius’s De Rerum Natura, Ovid’s Epistula Sapphus, and 1970’s Lesbian Poetry.” Throughout and following undergrad, Lucy worked on ecological farms in Vermont and Virginia. When not thinking and writing about the body in ancient literature, Lucy can be found reading contemporary poetry, making pizza, swimming in Lake Michigan, and daydreaming about raising chickens.