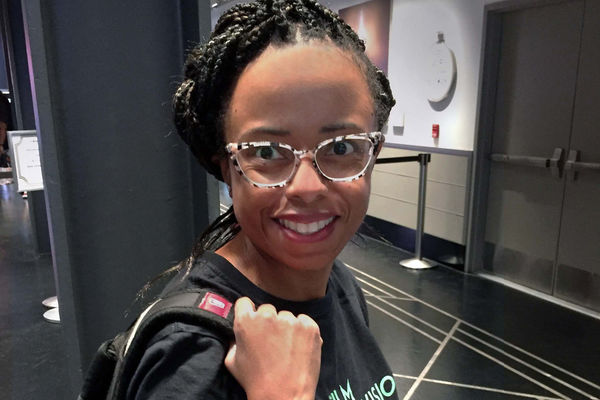 An assistant professor in the Department of Film, Television, and Theatre, Forsgren’s research shines a light on the essential role African American women have played in theatre history.

“No matter where my work takes me, the throughline is African American women and marginalized voices,” said Forsgren, who is a concurrent faculty member in the Gender Studies Program and an affiliated faculty member in the Department of Africana Studies. “My purpose as a theatre historian is to recover the gaps and silences of history so that we have a sense of the past and a purpose for the future.”

Forsgren was recently awarded the American Society for Theatre Research’s Oscar G. Brockett Essay Prize, given annually to the best essay of theatre research in a scholarly English-language publication.

The award honored her essay “The Wiz Redux; or Why Queer Black Feminist Spectatorship and Politically Engaged Popular Entertainment Continue to Matter,” which appeared in Theatre Survey.

Her essay explores three different versions of The Wiz — a musical reimagining of The Wizard of Oz that features an all-Black cast — and analyzes how queer Black feminist spectators would have perceived each adaptation.

“My research builds on the efforts of previous generations of Black women intellectuals who preserved and disseminated African American history and culture,” Forsgren said. “Unfortunately, many of these pioneering scholars and artists have yet to receive the recognition they deserve. Receiving this prize not only attests to the importance of queer black feminist spectatorship, but also honors the legacy of my foremothers.”

She was also recently appointed as associate editor of Theatre Survey, which will lead to her becoming editor of the journal in two years. In that position, she said, she will strive to empower authors and amplify the works of previously marginalized voices in the field.

“No matter where my work takes me, the throughline is African American women and marginalized voices. My purpose as a theatre historian is to recover the gaps and silences of history so that we have a sense of the past and a purpose for the future.”

Forsgren, who joined the Notre Dame faculty in fall 2017, has written two books on female dramatists in the Black Arts Movement and is now working on a third focusing on women in contemporary black musical theatre.

“All too often, I hear people say things like, ‘She’s the first black woman to do this or that,’ but no one really talks about why they’re the first,” she said. “They celebrate it, which is good, but they don’t question it. Why was it until the 1950s that a black woman was able to direct on Broadway? And why did it take another 20 years for the second black woman?

“Even now, there aren’t many black women directors on Broadway. And unless we have these conversations, we’re never going to come up with solutions.”

Forsgren’s first book, In Search of Our Warrior Mothers: Women Dramatists of the Black Arts Movement, was published in 2018 and examines the ways in which black women playwrights advanced feminist perspectives from within black nationalist discourses.

That research inspired her second book, which will be published in October. For Sistuhs in the Struggle: An Oral History of Black Arts Movement Theatre and Performance, Forsgren interviewed 30 black women activists, their comrades, and in some cases, their children to learn more about their work.

“At the time of the Black Arts Movement, these women didn’t really have the opportunity to be in dialogue with each other — they were just trying to survive,” Forsgren said. “But through the construction of this book, you get to hear all of their voices, intermingled, sharing their own narratives of what happened.”

Forsgren traveled throughout the U.S. to conduct the interviews — and said the funding she received from the College’s Institute for Scholarship in the Liberal Arts was essential to the project.

“That second book would not have been possible without ISLA, period,” Forsgren said. “The grant allowed me to purchase tickets, fly wherever I needed to over the weekend, and be back to teach. The College has been so supportive of my work.”

Forsgren is grateful not only for the financial support she’s received, but for her colleagues in FTT as well.

“I am also blessed to have people like Anne Garcia-Romero and Tarryn Chun who have participated in writing groups with me and provide feedback on my work,” she said. “That kind of support is priceless.”

After researching the Black Arts Movement for more than a decade, Forsgren is excited to be focusing on contemporary black musical theatre for her new book, tentatively titled Queer Black Feminist Spectatorship and the Shaping of Contemporary Musical Theatre.

The project was inspired by a course she began teaching at Notre Dame on African American musicals. While she enjoyed delving into the topic, she soon discovered a lack of critical literature available.

“The latest book was from the 1980s and focused solely on Broadway,” Forsgren said. “And if you only look at Broadway, you’re only going to get half of the story, because most of those marginalized voices, including black women, are doing wonderful, incredible work off Broadway.”

Forsgren is taking a twofold approach to the book project. She is examining productions directed, starring, or written by black women with a goal of recovering marginalized voices and exploring themes like black girlhood and the black church. And she is focusing on the role of the audience, particularly in shows with a cult following among queer black women.

“Spectatorship is important because we often talk about plays in isolation to the people who experience it,” she said. “And spectators are part of it — a production would not exist without an audience. We need to talk more about what theatre does for us as an audience, especially in relationship to social justice movements.”

Last year, Forsgren received a Faculty Research Support Initiation Grant and funding from ISLA to travel to an archive in New York to watch 15 filmed stage productions over the course of five days, including Broadway productions of The Color Purple, Bring in Da Noise, Bring in Da Funk, and Dreamgirls. She is also exploring productions from off-Broadway venues and the Chitlin’ Circuit — a pre-Civil Rights Era touring circuit for African American entertainers — as well as non-traditional casting in shows like Hamilton.

As she continues her research, Forsgren looks forward to bringing her work back into the classroom.

“Teaching is vital to my research process, and I will continue to invite my students to take part in that,” she said. “The questions they raise make me a better researcher as well.”

Ultimately, Forsgren hopes her book will provide greater visibility to the intersection of black women’s identity and showcase the artistry of black women creating musical theatre.

“I hope this not only makes people more aware of the gaps that exist in musical theatre, but also inspires them to take action,” she said. “Because when black women are given opportunities to create art, the results are groundbreaking and brilliant.”

“I hope this not only makes people more aware of the gaps that exist in musical theatre, but also inspires them to take action. Because when black women are given opportunities to create art, the results are groundbreaking and brilliant.”

Originally published by Carrie Gates at al.nd.edu on April 23, 2020.