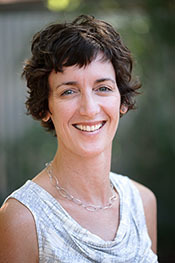 Mary Celeste Kearney is Associate Professor of Film, Television, and Theatre and Concurrent Faculty in the Gender Studies program.  She earned her Ph.D. from the University of Southern California's School of Cinematic Arts and was faculty in the Department of Radio-Television-Film at the University of Texas at Austin for 14 years before joining Notre Dame.  Trained in film, television, and cultural studies, Mary's research to date has focused primarily on gender, youth, and media culture.  She is author of Girls Make Media (Routledge, 2006) and editor of Mediated Girlhoods: New Explorations of Girls' Media Culture (Peter Lang, 2011) and The Gender and Media Reader (Routledge, 2011).   Her forthcoming book, Power Chords and Groupie Chicks: Gender and Rock Culture, will be published by Oxford University Press, and her next monograph will explore teenage girlhood in U.S. media culture in the mid twentieth century. Mary's essays have appeared in Camera Obscura, Continuum,  Cultural Studies, Feminist Media Studies, Journal for Children and Media, and the NWSA Journal.  She is a Console-ing Passions board member and serves on the editorial boards of Cinema Journal and Girls Studies.