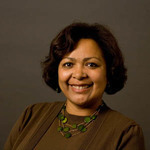 Cyraina Johnson-Roullier is an Associate Professor in the English Department and Concurrent Faculty in both Gender Studies and American Studies.  Her expertise is in modern literature, cultural theory and literature of the Americas.  She specializes in interdisciplinary comparative methodologies engaging with feminist theory, critical race theory and technologies of power in American and hemispheric American literature.  In both teaching and research Professor Johnson-Roullier treats the intersections of race, gender and power, especially as these are found in conflicts between masculinity and femininity as revealed in the permutations of language.  She has twice been invited to present on the Modernist Studies Association’s Annual Feminist Roundtable, and is the recipient of a Ford Foundation Minority Postdoctoral Fellowship, as well as numerous other grants and fellowships, both internal and external.  She is the author of Reading on the Edge: Exiles, Modernities and Cultural Transformation in Proust, Joyce and Baldwin (SUNY, 2000), and has published essays on feminist theory, cultural theory, critical race theory and American and African American literature.   She is currently at work on a second book-length project entitled Demo/dernity:  American Modernisms and the Atlantic World, 1776-1903, exploring the significance of 19th-century considerations of race and gender to an understanding of the intersection between race, gender and modernity in American modernism.  Professor Johnson-Roullier is editor-in-chief of the Review of International American Studies, the official peer-reviewed, open-access electronic journal of the International American Studies Association, of which organization she also serves on the Executive Council.