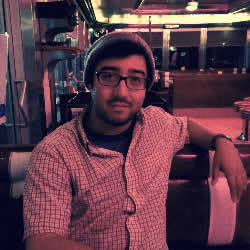 Francisco Robles is an Assistant Professor of English.  He teaches and researches in American Literatures of the twentieth century, and he focuses in particular on Multiethnic American Literature. Dr. Robles’s current book project, Migrant Modes: Aesthetics on the Move in the Long Popular Front, examines literary and musical representations of migrants in the United States. He is interested in examining what he calls the Long Popular Front, a mode and tendency of political and aesthetic action that signals an extended engagement with the coalitional politics of the Popular Front, beyond its typical periodization. By insisting on the enduring resonance of the Popular Front as a frame for understanding the political context of radical art focused on migration, he encounters texts that move and flow in unexpected and imaginatively powerful ways, creating new ethical and aesthetic practices that enable alternative means of undertaking and understanding textual representation. Some of the texts he looks at in Migrant Modes are by Zora Neale Hurston, Muriel Rukeyser, José Antonio Villarreal, Sanora Babb, Woody Guthrie, Americo Paredes, Lydia Mendoza, Tomás Rivera, Alice Walker, Odetta, the authors included in This Bridge Called My Back, and Lorna Dee Cervantes. Dr. Robles engages heavily with American Literatures, especially African American Literature and Chicanx Literature, Contemporary Literature and Culture, literature and ethics, LGBTQ* Literature, Postcolonial Literature, and Southwestern Literature.