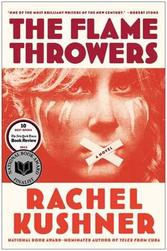 The Flamethrowers is an intensely engaging exploration of the mystique of the feminine, the fake, the terrorist. At its center is Kushner’s brilliantly realized protagonist, a young woman on the verge. Thrilling and fearless, this is a major American novel from a writer of spectacular talent and imagination.

Open to Students, Faculty and Staff

Marshall’s work has been published in literary journals such as NOVEL and Studies in American Fiction, as well as in specialized interdisciplinary venues. She has lectured at the architecture school at the ETH in Zurich and co-organized an international conference on media and architecture in Weimar, Germany, funded by the Thyssen Research Foundation. In addition to being concurrent faculty in the American Studies department, she also serves on the faculty of Notre Dame’s History and Philosophy of Science graduate program and is a fellow at the Reilly Center for Science, Technology, and Values.

FREE COPIES to first 20 to sign up – Email Gender@nd.edu