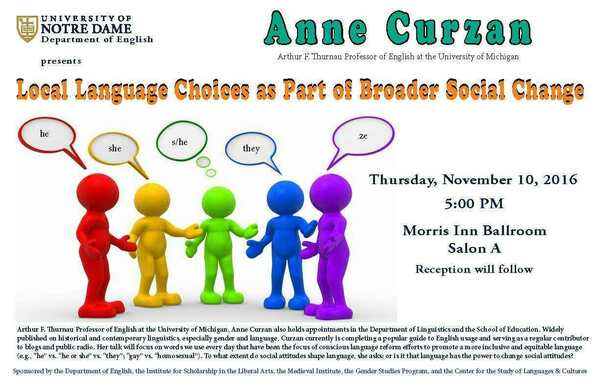 Arthur F. Thurnau Professor of English at the University of Michigan, Anne Curzan also holds appointments in the Department of Linguistics and the School of Education. Widely published on historical and contemporary linguistics, especially gender and language, Curzan currently is completing a popular guide to English usage and serving as a regular contributor to blogs and public radio. Her groundbreaking Gender Shifts in the History of English (Cambridge University Press, 2003) traces the inherently shifting patterns of grammatical and natural gender usage in English, while her recent Fixing English: Prescriptivism and Language Change (Cambridge University Press, 2014) unpacks bromides about the decline of English language usage by reading them against both social anxieties and the specifics of natural language change. At Notre Dame she will speak on the question of whether small language changes (e.g., nonsexist language reform) matter in terms of broader social change.

The talk has been made possible by support from the Institute for Scholarship in the Liberal Arts, the Department of English, the Gender Studies Program, the Center for the Study of Languages and Cultures, and the Medieval Institute.