The Institute for Scholarship in the Liberal Arts is enthusiastic to announce the ISLA Distinguished Lecture Series, an annual event featuring scholars in the Arts, Humanities, and Social Sciences whose interdisciplinary work has broad appeal. The inaugural lecture, “How Albert Camus became an American writer — or at least a household word,” will be delivered by Yale Professor Alice Kaplan on November 19, at 4 pm, in the Eck Center Auditorium. Kaplan’s comments are destined for a wide audience, including undergraduate and graduate students as well as postdoctoral fellows, professors, and members of the larger South Bend community. Please feel free to distribute the digital advertisement that figures below.

Alice Kaplan—the John M. Musser Professor of French at Yale University, Chair of the Department of French, and founder of the Yale Translation Initiative—works at the intersection of literature and history. Her teaching and research have focused on the Second World War, the Algerian War, and on the writers Céline, Proust, and Camus. She is a former Guggenheim Fellow, a member of the American Academy of Arts and Sciences, and a recipient of the French Légion d’Honneur as well the Los Angeles Times Book Prize in History (for The Collaborator) and the Henry Adams Prize (for The Interpreter). Her most recent book, Looking for the Stranger: Camus and the Life of a Literary Classic, was a finalist for the National Book Critics Circle Award (criticism) and the Prix Médicis (essay).

Her lecture will focus on the mystery of cultural transmission, on what factors contribute to making one foreign author rather than another a known name in the United States, by examining the success of Albert Camus’s The Stranger. 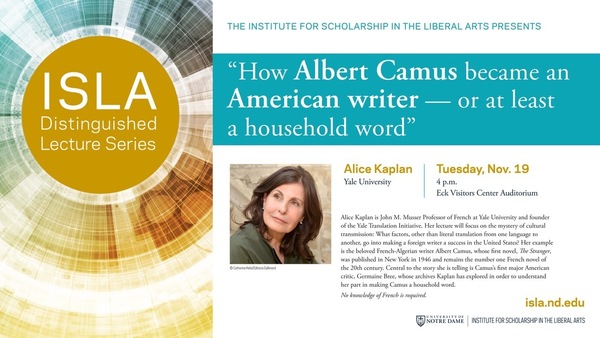