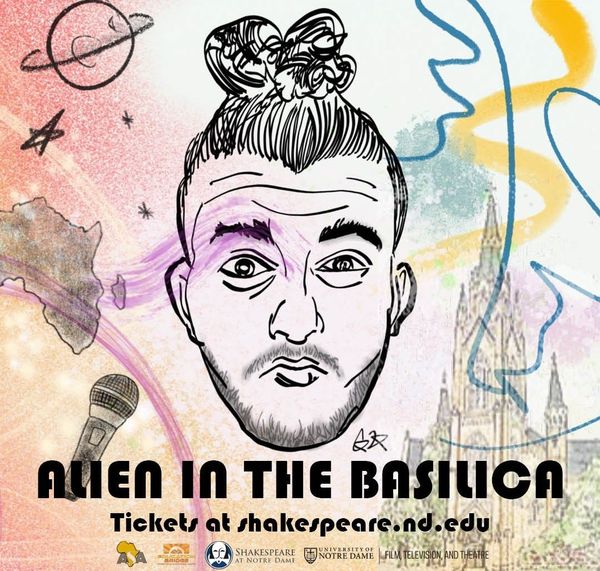 Notre Dame alum Najmeddine Harrabi (“Naj”), Class of ‘19, will return to campus in February to perform and record a stand-up comedy special performance entitled Alien in the Basilica.

Alien in the Basilica highlights Naj’s experiences as an immigrant from Tunisia living in America.

Najmeddine Harrabi (‘19) grew up as a sheep and goat shepherd in the countryside of Tunisia. Over the years, especially after the Arab spring, Naj became more involved in media literacy and activism in Tunisia. He founded WeYouth-Tunisia, a nonprofit aimed at motivating young people to engage in decision making. At the African Leadership Academy in South Africa, Naj further explored his passion for filmmaking, sci-fi, and comedy, and came to the University of Notre Dame as a Hesburgh-Yusko Scholar. During summers, Naj took classes at Second City in Chicago and interned at the TBS show Conanin Los Angeles. He also performed as an actor, stand-up comic, and writer for different on and off-campus shows. Naj is currently pursuing an MFA in film and television production at the University of Southern California (USC).

Ngor Majak Anyieth (‘18) Born in South Sudan, Majak lost his father at a young age in Sudan’s civil war and was raised by his mother, who emphasized the importance of education. Anyieth took her guidance to heart, embarking on a life-changing journey that now allows him to give back. Majak was one of the first to be named among the Domer Dozen, a group of young Notre Dame alumni who continue to make a difference in their faith, service, learning, and work, serving as inspiring role models to a rising generation of soon-to-be Notre Dame graduates.

This exclusive premiere event will be filmed for future broadcast.