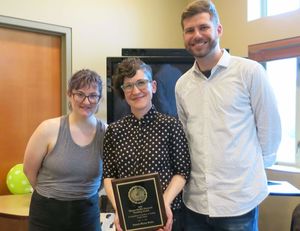 According to the 2018 Hancock Award selection committee, “What made Pam Butler stand out from our other wonderful award nominees were three especially noteworthy qualities: her absolute devotion to her students, the wealth of her knowledge related to gender studies, and the sheer excitement of her courses, courses that integrate community involvement and social activism with the more theoretical concerns traditional to gender studies.” Several students noted Dr. Butler’s deep commitment to praxis in her classes, and one student commented, “Our assignments were exciting because they went beyond theory and worked to make a positive impact here, in the Notre Dame community.” Dr. Butler is also well known for sharing her knowledge in gender studies with students who are not in her classes.  As one student wrote, “Students can come to Professor Butler with a vague interest or question about gender, intersectionality, race, or really anything to do with gender studies, and leave with dozens of references, a more precise understanding of their interest, and a new and meaningful connection with the most helpful professor on Notre Dame’s campus.”

Dr. Butler’s research uses critical-race and transnational feminist critique to understand popular and public cultures in the United States. Her areas of expertise include post/feminist pop culture; U.S. histories of gender, sexuality, and empire; feminist political economy; and the carceral state. Her current book project, The Secret History of American Knitting: Entanglements of Race, Sex, and Empire, is a genealogical political history of hand-knitting in the United States since the mid-19th century, focused on the ways in which domestic handcrafts have produced diverse racial and sexual subjectivities through such sites as the home, the prison, the museum, and the global economy. Her work has been published in Meridians: Feminism, Race, Transnationalism, and in the collection Queer Twin Cities. In addition to her academic work, Dr. Butler is a master knitter, a member of the National Needle Arts Association, and an internationally renowned designer of hand-knitting patterns.

Prisons and Policing in the U.S.