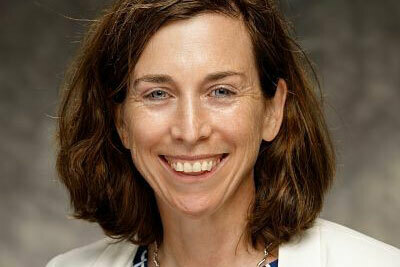 Eileen Hunt, a professor in the Department of Political Science, has won the David Easton Award for her 2021 book, Artificial Life After Frankenstein.

The annual award from the American Political Science Association’s Foundations of Political Theory section recognizes a book that “broadens the horizons of contemporary political science by engaging issues of philosophical significance in political life through … approaches in the social sciences and humanities.”

In Artificial Life After Frankenstein, Hunt builds on her prior work applying political theory to interpret Mary Shelley’s classic 1818 novel Frankenstein. She develops a theoretical framework for how to bring technology-based ethical issues — like making artificial intelligence, robots, genetically engineered children and other artificially-shaped life forms — into debates on human rights, international law, theories of justice, and philosophies of education and parent-child ethics.

The award came as quite a surprise, Hunt said.

“I did not expect such an honor to come my way, although it is a wonderful recognition for the enduring philosophical importance of the writing and ideas of Mary Shelley,” she said. “I hope it inspires others, especially students, to look to Shelley as a guide of sorts to the ethics of making, caring for, and relating to other life forms and forms of life.”

Hunt, a fellow of the Kroc Institute for International Peace Studies and the Nanovic Institute for European Studies and a concurrent faculty member in the Gender Studies Program, said her fourth book’s central argument is that all humans are artificial creatures — and recognizing that moral and social fact opens the door to empathy and understanding.

“Once we realize we are all products of a wider social and cultural environment,” Hunt said, “then we are better situated to be open to sharing sympathies with what Shelley called our ‘fellow creatures’ — people and other beings (including other animals and non-sentient beings, like robots, or even the environment) that might not seem like they fit into any box or stereotype of the human,” she said.

Frankenstein’s Creature is the prototype of the cyborg in modern science fiction — think Blade Runner — and for modern conceptions of AI and bioengineered beings, she said. Mathematician and cryptographer Alan Turing alluded to imagery of 1930s Frankenstein movies in his 1948 paper on intelligent machinery. He also had plans to make an “electronic brain.”

“As we make progress toward building hyper-intelligent AIs and more genetically modified children are born around the world through the implementation of assisted reproductive technologies, we are facing a pivotal cultural moment in which recognizing our artificiality and our relationship to other artificially-shaped beings will be of utmost moral and political importance,” she said.

Shelley anticipated this moment when the Creature met his maker, Frankenstein, on the glacier.

“They sit down, and the scientist listens, if only briefly, to his abandoned Creature's story of loss, violence, and tragic disconnection from society,” she said. “Shelley foresaw the need to prepare people to feel openness to new forms of life and other life forms, without running away in irrational fear and horror.”

The tragedy of Frankenstein, Hunt said, stems from the scientist running away from his Creature three times — a betrayal similar to that of Jesus by Peter — and then reverberates outward, hurting others.

“For us to avoid such tragedy,” she said, “we should be mindful of Shelley’s ethical lesson: When confronted with another being who/that is strange or disorienting to you, take the time to look that being in the eye, hear their story, and try to imagine what they feel — or could feel.”

By facing the other,  we come to terms with our own otherness, said Hunt, who credits Shelley for, in some ways, originating the philosophical schools of thought now associated with phenomenology and existentialism.

Hunt is now working on a follow-up book, The Specter of Pandemic: Mary Shelley and Post-Apocalyptic Political Thought, which will explore these themes in relation to Shelley’s novel The Last Man and its legacies for dystopian, existentialist, and post-apocalyptic literature, from Edgar Allan Poe to George Orwell to Albert Camus to Margaret Atwood.

The Last Man, published in 1826, is a futuristic political science fiction novel about how interpersonal conflict, left unchecked, spirals into violence, pandemics, and the gradual extermination of the human race.

This summer, Hunt is doing research for the book in the United Kingdom, thanks to a Carr-Thomas-Ovenden Fellowship in English Literature from the Bodleian Library at Oxford University. She also has received a grant from the Institute for Scholarship in the Liberal Arts to begin working on another book project, Orwell’s Women: A Life in Love, Books, and Politics.

Hunt has earned a number of awards previously for her scholarship, including the APSA’s 2014 Okin-Young Award for the best article in feminist political theory for “Making an American Feminist Icon: Mary Wollstonecraft’s Reception in US Newspapers, 1800-1869”; and the Society for the Study of American Women Writers 2012 Edition Award (co-recipient) for the documentary edition of Hannah Mather Crocker’s Reminiscences and Traditions of Boston.

Hunt has been interested in modern political thought, feminism, ethics of technology, and philosophy since she read gothic, science fiction, horror, and dystopian literature as a youth. Her interests in those areas and her transition into research about it crystallized around 2013, when she began looking ahead to the bicentennial of Frankenstein in 2018.

She won an American Council of Learned Societies fellowship in 2015, allowing her to spend a year working on her book Mary Shelley and the Rights of the Child: Political Philosophy in ‘Frankenstein’, published in late 2017. Hunt posited that Creature was an abandoned, abused orphan, and that the novel was a conceptual resource to explore the rights of today’s children — including those who are disabled and genetically modified. The publication of Artificial Life After Frankenstein was supported by a 2019 book grant from the Alfred P. Sloan Foundation’s Public Understanding of Science, Technology & Economics Program.

In September, she will give the honorary Phil Smith lecture at the Ohio Valley Philosophy of Education Society’s annual conference. Her lecture is titled  “Artificial Intelligence: Frankenstein and Modern Education” and will be the basis of a new book project, “AI Before and After Frankenstein.” She has been teaching on this topic in recent years, including a graduate political theory seminar and a Glynn Family Honors Program humanities seminar on the theme of “Monsters of Modern Political Thought: Hobbes to Shelley.”

“I hope to continue making Shelley’s work relevant to contemporary debates on the making of artificial life and intelligence through genetic engineering and computer science,” she said.

Originally published by Beth Staples at al.nd.edu on August 18, 2022.