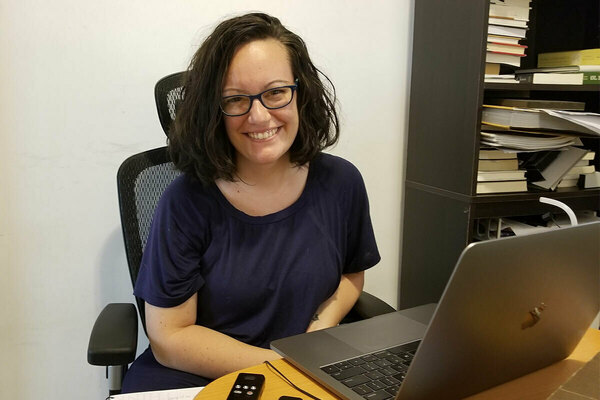 Abigail Jorgensen ’16 first began exploring women’s relationships with politics for her senior thesis in the College of Arts & Letters. That experience not only sparked a passion for research, but also laid the foundation for her career in academia.

Now a Ph.D. candidate in Notre Dame’s Department of Sociology with a graduate minor in gender studies, she is finalizing her dissertation on motherhood, fertility intentions, and political behavior, titled “Becoming the Mommy Politic.”

“It’s funny to look back and see that it all started as a topic for my senior thesis, and it’s just gotten more and more nuanced as I write more and more words,” she said. “It feels like the culmination of a really long journey where I knew what I wanted to do and I've been able to do it, which has been a lot of fun.”

While existing research on voting behavior often divides women into “mothers” and “non-mothers,” Jorgensen argues that scholars should take a more expansive view of when the shift into motherhood begins and how long it takes.

Jorgensen, who is a birth and bereavement doula and childbirth educator, said the way people talk about non-mothers didn’t reflect the experiences she sees people having in society.

“My initial reaction was that this group is really disparate,” she said. “There are women who plan to never have children, women who hope to become mothers or are trying to conceive, and women who are pregnant or who have suffered pregnancy loss. I really wanted to delve deeper into how their fertility intentions shaped their politics and how their politics, in turn, shaped their intentions.”

“It’s funny to look back and see that it all started as a topic for my senior thesis, and it’s just gotten more and more nuanced as I write more and more words. It feels like the culmination of a really long journey where I knew what I wanted to do and I've been able to do it, which has been a lot of fun.”

For her dissertation, Jorgensen launched a longitudinal study in Wisconsin in 2019 to track 74 women in three groups — mothers, those who were pregnant or trying to conceive, and those who do not intend to become mothers — and their political views over time.

As Jorgensen was planning for her second summer of fieldwork, the coronavirus pandemic hit, forcing her to re-evaluate the study.

“I was really excited to follow these women, especially those in the second group, as they went through the transition into parenthood,” Jorgensen said. “I was expecting the other two groups’ views to remain the same and this group to really shift — but then we had the pandemic, and everyone shifted.”

Jorgensen was well-positioned to incorporate the pandemic’s effects into her research, as she had already established a rapport with her participant group and was able to use her first year of data before the event as a baseline.

“The unwritten assumption in my original research question was, how are women’s fertility intentions and politics related to each other in normal times?” she said. “I’m still interested in what their relationship with government is like and how that differs by parenthood status, but I had to address the impact of COVID-19 on that relationship, too.”

One of the early themes to emerge from Jorgensen’s data analysis is that “struggling” is a key association with the identity of motherhood. In the first year of her study, many of the women who were trying to conceive but did not yet have children saw themselves as mothers because of the struggles they were going through — from fertility treatments to taking prenatal vitamins to working a second job to save for adoption costs — in order to have children.

Conversely, some mothers she interviewed and surveyed did not consider motherhood a strong part of their identity because they felt they did not have to struggle enough — because, for example, their children did not have special needs or because their babies quickly slept through the night.

“And then we have the pandemic, which suddenly increases struggles for mothers everywhere,” she said. “For women who have kids, they don’t have daycare or school anymore. The women who are pregnant have to worry about giving birth during a pandemic. And for the women who were trying to conceive, fertility clinics were shutting down and adoptions were taking forever in the courts. All these women increased in their struggles.

“In the second year, I found that every single person in those two groups felt like they were a mother. Because motherhood is struggle and the pandemic increased struggles for all these people, it also increased identification as a mother.”

Jorgensen, a Notebaert Fellow and an affiliate of the Kellogg Institute for International Studies, was eager to reconnect with her participants this summer and to analyze another year of data to see the continued effects of the pandemic and other political events.

She is also grateful for the support of the University and her faculty mentors during the pandemic — and throughout her time at Notre Dame. She has received funding for her research from the Gender Studies Program, the Department of Sociology, the Kellogg Institute, and the Institute for Scholarship in the Liberal Arts.

“My plan is to continue to interview this group for as long as I can, and I’m so grateful for all the funding opportunities that have made that possible,” she said. “So many people experience burnout with their projects because they get sick of looking at the same data at a certain point. But I don’t have that problem, because I keep getting new data.”

Jorgensen, who majored in political science and gender studies and minored in theology as an undergraduate, chose to return to Notre Dame for her graduate studies, in part, because of the University’s broad range of sociology scholars and strength in the study of religion.

“The constellation of mentorship and emphasis on cultural sociology we have in the department is amazing,” she said. “I was also very interested in making sure I could address how religion plays into the different decisions women make in regard to politics and family. At Notre Dame, I knew I would be part of a program with academic rigor, a wide variety of opportunities, and a supportive environment.”

Originally published by Carrie Gates at al.nd.edu on August 12, 2021.