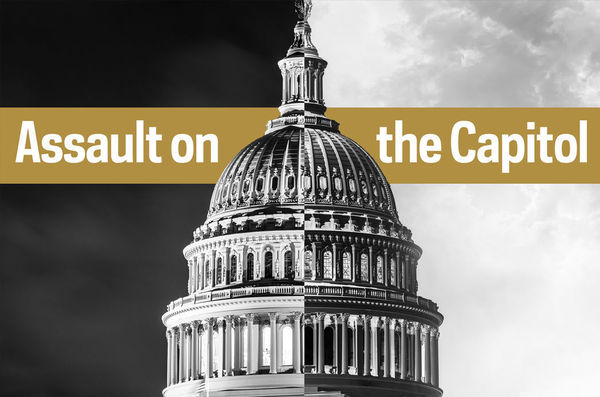 What just happened? That’s what Notre Dame’s Klau Center for Civil and Human Rights and Rooney Center for the Study of American Democracy asked three campus experts to consider for “Assault on the Capitol,” a panel discussion Friday about the events two days previous when rioters breached the halls of Congress, delaying the certification of the presidential election. Selections from the panelists:

Another theory under the seditious conspiracy statute would be if the president had the intent to “seize, take, or possess any property of the United States contrary to the authority thereof.” And at least with respect to his supporters that actually stormed the Capitol building, I think we could argue that they had the intent to take possession of the Capitol building, to control it, to, again, take possession of the seat of our democracy.

Second, I think that President Trump should be investigated for violating the insurrection statute. This statute carries a penalty of 10 years in prison. But also, part of the penalty is that if the defendant is found guilty, he is incapable of holding any office under the United States. That would prevent the president from running for reelection in 2024. And here the elements are quite straightforward. The statute simply provides “whoever incites, assists or engages in any rebellion or insurrection against the authority of the United States or the laws thereof.”

What we witnessed with respect to the attack on the Capitol Building, did that constitute rebellion? Did that constitute insurrection? Insurrection is defined by Webster’s dictionary as an uprising against the government. Is that what Trump’s supporters were doing, engaging in an uprising against the government? I think that it could be argued that’s exactly what they were attempting to do.

The last statute is the Anti-Riot Act. It carries a penalty of not more than five years in prison. And it has three elements. It provides that whoever travels in interstate or foreign commerce or uses any facility of interstate or foreign commerce, including but not limited to a phone — in this particular case, I think his cellphone would be applicable — with the intent to do one of four things. With the intent to incite a riot, number one. Number two, to organize, promote or participate in a riot. Number three, to commit any act of violence in furtherance of a riot. Or four, to aid and abet any person in inciting or participating in a riot or any act of violence in furtherance of the riot.

So here, I think, clearly the rioters traveled in interstate commerce. Most of them traveled from outside the District of Columbia to come to Washington, D.C., to participate in active insurrection. And I think others, perhaps even including the president himself, used a facility of interstate or foreign commerce, a cellphone. And that cellphone was used by President Trump, again via Twitter, to organize his supporters, to invite them to come to Washington, D.C. on January 6 to participate in this wild event, as he characterized it, in an attempt to delay the election certification process.

I think that it could be argued that President Trump had the intent to incite a riot and that his followers participated in the riot, and certainly committed acts of violence in furtherance of the riot. We know now that five individuals died as a result of these violent acts and that dozens and dozens of Capitol police and other law enforcement officers were injured as a result of their violent conduct. And so, again, I think a compelling argument can be made that President Trump and his followers are liable for violating the Anti-Riot Act.

If our democracy is truly a constitutional democracy based on the rule of law, then people who violate the rule of law must be held accountable. Otherwise the foundation of our democracy will begin to crumble. And I believe, as the framers believed, that no one is above the law, including the President of the United States.

What we saw Wednesday was an extreme version of a set of behaviors that are really, frankly, endemic to human relations. And that’s the in-group and out-group identity. We know that social cohesion is necessary for survival. We know from psychologists that categorization of the whole world, including other people, is how we, as human beings, understand the world. But more importantly, it’s how we understand our own place in the world.

We know that there's a basic human need for both inclusion, to be part of something, but also differentiation — “I am this,” or, “I am not that.” Group identity is really how we psychologically attain those sorts of basic human needs for inclusion, for categorization, for understanding where we sit in the world.

In The Federalist Papers, the framers, Hamilton in particular, talked about the relationship between partisanship and the stability of American democracy. And what Hamilton wanted to argue was that, actually, the large size of the United States, even at the time of the founding, was going to make it possible for democracy to succeed despite these human preferences for in-group and out-group behaviors, and what Hamilton said is, it’s such a large country, we’re going to have — he didn’t use this term — crosscutting cleavages.

What does that mean? It means that I’m going to have lots of different group identities, and that to the extent that they overlap, I’m never going to see other people as entirely the enemy. My labor union membership might lead me to favor certain outcomes and certain policies, but my Catholic identity might lead me to different sorts of conclusions. And while I might disagree with someone on the basis of partisan identification, they may, however, still be my co-religionist, and so I can’t really see them in such a negative light, because we share other values, even if we disagree on particular identities.

Throughout American history, one of the most consistent things we see is when identities align rather than crosscut, we see sharper partisanship and much more political violence. We are in a period like that today. We have fewer of these crosscutting alliances.

When all of our identities line up with our partisanship, it’s not just that I lost or that my party lost, but that my religious tradition lost, that my racial group lost. This leads to things like negative partisanship, in which it’s more that we dislike the other party than we’re so supportive of our own party.

The most obvious historical parallels are before the Civil War, when there were dozens of violent attacks, including guns drawn on members of Congress. The Civil War itself can be understood as the ultimate outcome of partisan violence. It was, as [Louisiana State political scientist Nathan Kalmoe] has said, actually an election-disrupting event. Lincoln was certified as president, and Southern Democrats protested that violently, and that led to the Civil War.

I'm a little bit skeptical of it myself, but some excellent political scientists have argued that we needed to worry about the breakdown of democracy under Trump, that he represented something very akin to heads of governments such as Vladimir Putin in Russia, Erdoğan in Turkey, Viktor Orbán in Hungary. These are executives who have presided over democratic breakdowns. In fact, the most common form of democratic breakdown since the end of the Cold War is not a coup by external actors but rather executive takeovers of democracy. I think that Trump, by trying to overthrow an election, if he had succeeded, then we might say, “Yes, this does constitute an executive coup.” But as it is, I think it’s more of a failed attempt to take over democracy.

How would I characterize President Trump’s actions during this period and during his term? I would say it was a very aggressive attempt to weaken democratic checks and balances, to undermine opposition rights, to attack opposition, to install loyalists throughout branches of government, throughout government agencies which should be independent of the executive, but in Trump’s view should be agencies staffed by loyalists to him. To most viewers of democracy, this is dangerous. And if it goes really, really far, it can eventually tilt into executive takeovers of democracy. There’s no question about that.

If we compare how far Trump went down the road of an executive takeover to Viktor Orbán or Putin or Hugo Chávez and his successor, Nicolás Maduro, in Venezuela, Trump was not very successful. He did not go very far down that path.

Did he have the ambition? Did he have a personality style, personal preferences, similar to many of those other leaders? I would say yes to that question. But our institutions generally, they mostly held. And we saw this in this period between the first Tuesday in November and Wednesday of this week. The assault on democratic norms, I think, under the Trump administration was very profound. And it would’ve continued, probably, in a second Trump term. But I think that my own view is that our institutions did hold relatively well.

If you look at the two most important democracy measures in the world, Freedom House and Varieties of Democracy, they do not place U.S. democracy among the most vibrant in the world, by a long shot. Freedom House lists about 50 countries in the world as having more solid democracies than we do in the United States today. I’m not convinced that that judgment is absolutely spot-on, but I am absolutely convinced that we do have very important democratic problems today that have to be addressed.

I don’t want to be Pollyannaish here, but Wednesday’s events, I believe, could prove beneficial — not in a huge way but in some modest way — to our democracy. Specifically, I think we see a modest peeling off of some parts of the Republican Party from Trump. And in my view, Trump represented a more authoritarian project within the Republican Party. And I think it’s very healthy for American democracy to have some of the Republican Party peeling off from the Trump wing. Before Wednesday, I would’ve judged that Trump would probably have been almost unbeatable if he had run for the Republican nomination in 2024. And I think that has changed. I’m not saying that he couldn’t win now, but I think that his chances of retaining the fierce hold that he’s had over the last four or five years, over the party, I think that that has changed somewhat.

Originally published by Notre Dame Magazine at klau.nd.edu on January 11, 2021.