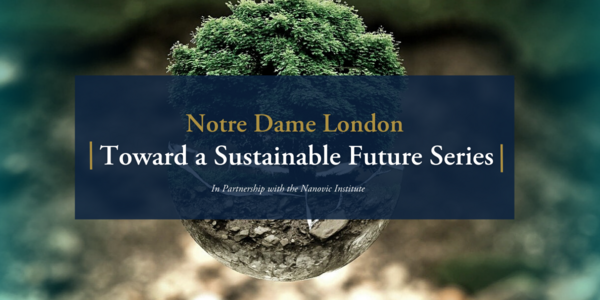 With support from the Nanovic Institute for European studies, the London Global Gateway has launched the ‘Towards a Sustainable Future Series’. These virtual events are inspired by Pope Francis' vision set out in 'Laudato Si': On Care for Our Common Home', which calls all people to respond to the "cry of the earth" and the "cry of the poor".

The series features prominent European academics trained in the sciences, engineering, Catholic Social Teaching, ecological and political theology. By examining what a just transition to a sustainable future looks like from a variety of perspectives, the series reaches for an interdisciplinary examination of our current climate concerns and Laudato Si'.

"At a time when we’re beginning to appreciate the fragility of the earth, Pope Francis has challenged us to consider the ways that we can work together to sustain it,'' said Fr. Jim Lies, C.S.C., academic lead in London. “The Holy Father recognizes that it’s the poorest and the most vulnerable among us who will suffer the worst effects of climate change. In our program, we’ve tried to look at the issue from an array of perspectives and imagine a more sustainable future.”

The first in the series, entitled 'Why Does Biodiversity Matter to Us All?' was led by Professor Celia Deane-Drummond, a scientist and a theologian. The lecture looked at why we need to  care about biodiversity from a religious and moral perspective.

Dr. Ellie Cosgrove will present the next in the series, entitled ‘Bringing ourselves to our work: work as creative practice’. Cosgrove is a Professor in Urban Innovation and Policy at UCL, as well as the Director of Publica’s Community Interest Company and Research. As an engineer, interdisciplinary researcher, dancer, and trained systems thinker, she is motivated by how scientific endeavor, artistic practice, and policy innovation can combine to create a healthier and fairer society, particularly with respect to gender and just climate transitions.

Originally published by Joanna Byrne at london.nd.edu on March 05, 2022.