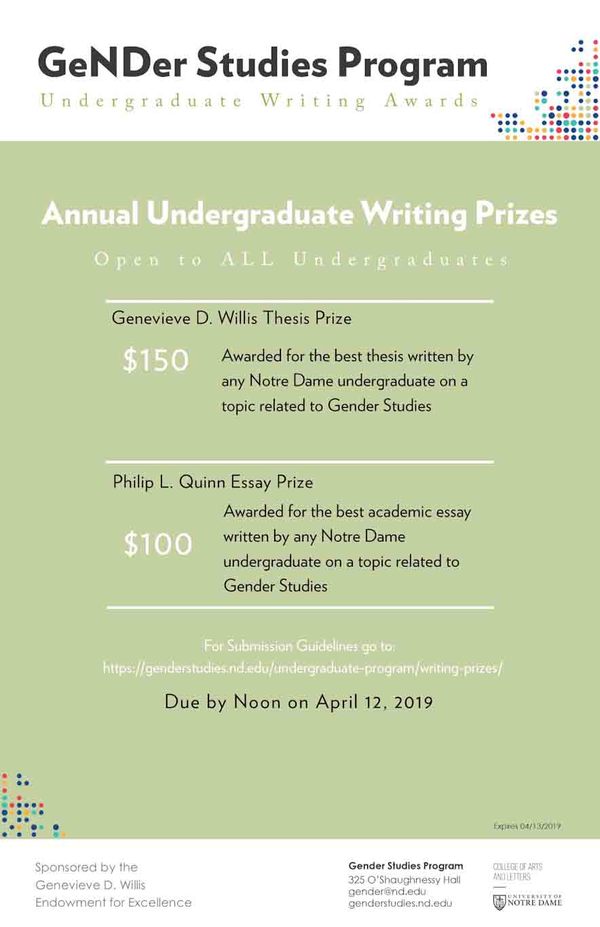 The winning submission should be at least a 25-page academic thesis addressing issues pertaining to Gender Studies. It must have been written during the academic year. As we mention on our home page, “Gender Studies analyzes the significance of gender—and the cognate subjects of sex, sexuality, race, ethnicity, class, religion, and nationality—in all areas of human life, especially in the social formation of human identities, practices, and institutions.” The winning thesis will address gender, or gender plus any of these cognates. It will demonstrate advanced, if not original, academic research in Gender Studies. Stylistically, the winning thesis will conform to the expectations of professional academic research and writing at the advanced undergraduate level.

The winning submission should be an academic essay written by an undergraduate for a course taken at the University of Notre Dame. The academic essay may take the form of a research paper but cannot be a senior thesis. It must address issues of gender, or gender plus any of its cognates, as defined above. The winning essay will demonstrate advanced work in Gender Studies. It will also have a logical structure, clear language, and a well-supported argument.