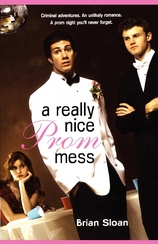 Portraying a series of seemingly insurmountable obstacles in a fashion that would put a soap opera to shame, Brian Sloan’s A Really Nice Prom Mess, at first, seems to be a conventional gay young adult novel and comedy of errors. However, despite its conventionality, few readers have recognized Sloan’s work as being one of the rare young adult novels that portray queer characters who also happen to be disabled: a gay ex-football player who is deaf in one ear, and a gay stripper who is entirely deaf. My discussion will aim to reveal the constructed nature of disability through a queer analysis of A Really Nice Prom Mess. I argue that although these deaf characters are not the focus of Sloan’s novel, their presence serves as a platform that allows one to organically approach deafness through a queer perspective—a platform that enables an unexpected opportunity to add richness and complexity to conversations on disability and the construction of identity. Furthermore, my analysis of this young adult novel will highlight how the queering of deafness emphasizes the potential that human subjects have to approach their bodies as a sites of resistance that challenge normative and condescending categorizations.

Angel Daniel Matos is a José Enrique Fernández fellow at the University of Notre Dame, where he studies contemporary American fiction with a particular interest in queer theory, postmodernity, young adult fiction, and the novel of development. His current work focuses on the periodization of Anglophone LGBTQ literature and the mediations of young adult fiction in the construction of a contemporary queer literary canon. Prior to his time at University of Notre Dame, Angel studied English generative and applied linguistics at the University of Puerto Rico - Mayagüez Campus (B.A. 2009), where he graduated summa cum laude. He also received his master’s degree in English Education from his Alma Mater (M.A. 2011), where he wrote his thesis on scapegoating and personal development in the Victorian Bildungsroman. His work has been published in Atenea and in The ALAN Review‘s 40th anniversary summer issue, for which he was the recipient of the 2013 Nielsen-Donelson Award for the best article published during the issue year. He currently serves as the University Writing Program’s Graduate Student Assistant Director for the 2013-14 academic year.

Workshops are held on Fridays from 12:00 – 1:00 pm in 119 O’Shaughnessy unless otherwise specified below.