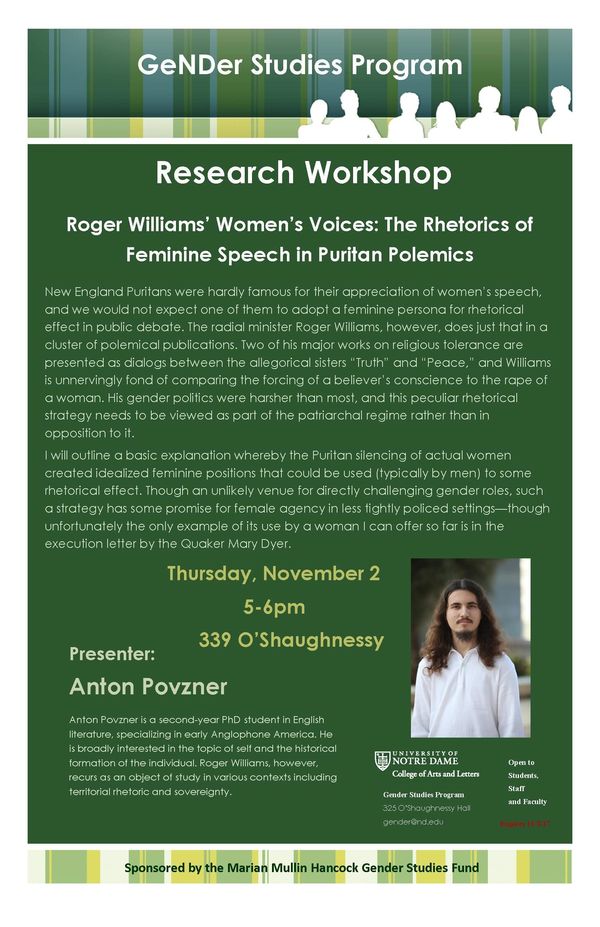 New England Puritans were hardly famous for their appreciation of women’s speech, and we would not expect one of them to adopt a feminine persona for rhetorical effect in public debate. The radial minister Roger Williams, however, does just that in a cluster of polemical publications. Two of his major works on religious tolerance are presented as dialogs between the allegorical sisters “Truth” and “Peace,” and Williams is unnervingly fond of comparing the forcing of a believer’s conscience to the rape of a woman. While Williams has been lauded for his progressive stance on religious freedom and on Native American rights, his gender politics were harsher than most, and this peculiar rhetorical strategy needs to be viewed as part of the patriarchal regime rather than in opposition to it.

In this short paper, I will outline a basic explanation whereby the Puritan silencing of actual women created idealized feminine positions that could be used (typically by men) to some rhetorical effect. Though an unlikely venue for directly challenging gender roles, such a strategy has some promise for female agency in less tightly policed settings—though unfortunately the only example of its use by a woman I can offer so far is in the execution letter by the Quaker Mary Dyer.

Anton Povzner is a second-year PhD student in English literature, specializing in early Anglophone America. He is broadly interested in the topic of self and the historical formation of the individual. Roger Williams, however, recurs as an object of study in various contexts including territorial rhetoric and sovereignty.