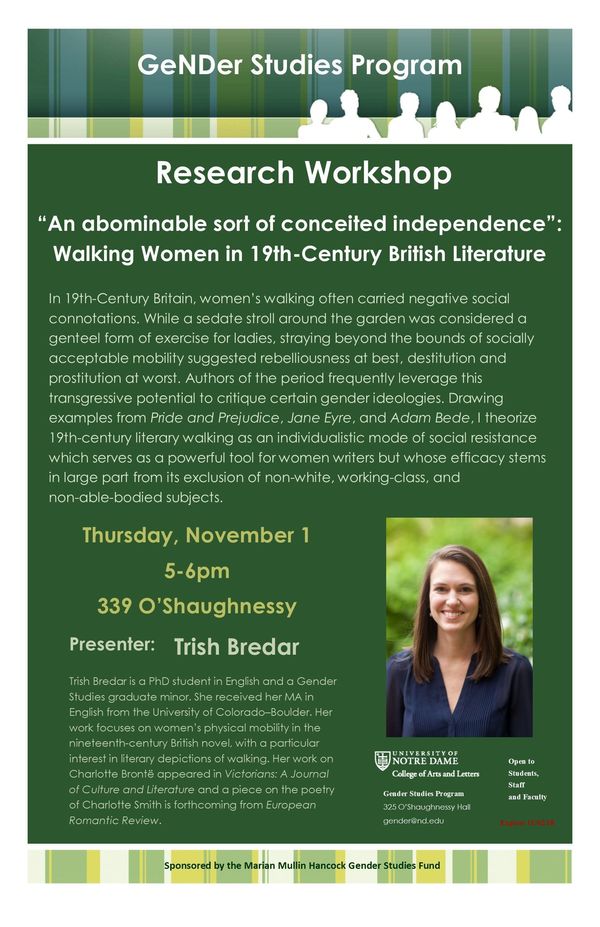 In nineteenth-century Britain, women’s walking carried complex and often negative social connotations. Though a sedate stroll around the garden was considered a desirable, genteel form of exercise for ladies, anything beyond this carefully circumscribed activity was linked to a certain wildness and rebelliousness at best, and at worst to destitution and prostitution. This paper argues that, through their literary representations of female mobility, women writers of the time period were able to leverage walking as a tool for critiquing and resisting prescriptive gender ideologies. Drawing examples from Pride and Prejudice, Jane Eyre, and Adam Bede, I theorize literary walking as an individualistic mode of social resistance which serves as a powerful tool for women writers but whose efficacy stems in large part from its exclusion of non-white, working-class, and non-able-bodied subjects.

Trish Bredar is a PhD student in English and a Gender Studies graduate minor. She received her MA in English from the University of Colorado–Boulder. Her work focuses on women’s physical mobility in the nineteenth-century British novel, with a particular interest in literary depictions of walking. Her work on Charlotte Brontë appeared in Victorians: A Journal of Culture and Literature and a piece on the poetry of Charlotte Smith is forthcoming from European Romantic Review.