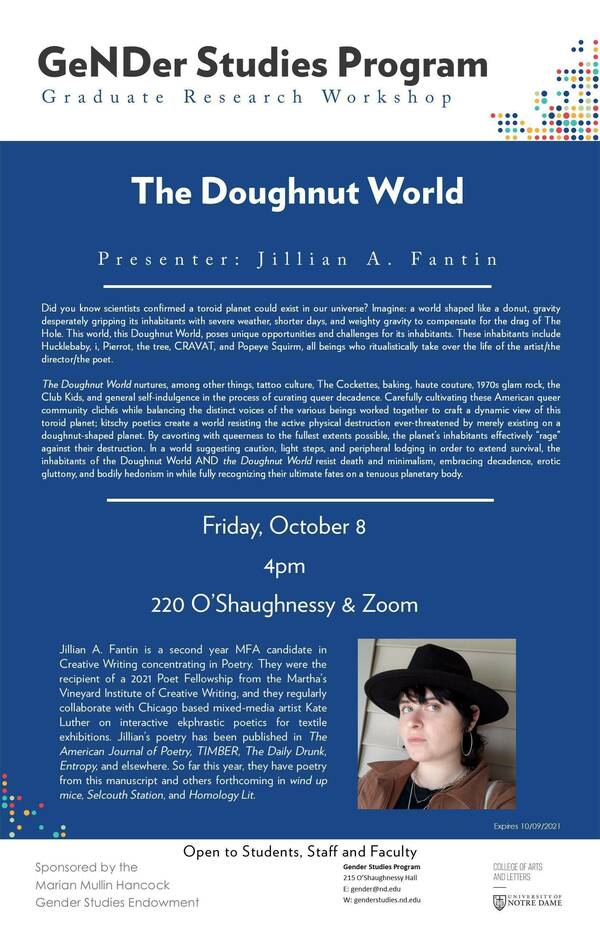 Did you know scientists confirmed a toroid planet could exist in our universe? Imagine: a world shaped like a donut, gravity desperately gripping its inhabitants with severe weather, shorter days, and weighty gravity to compensate for the drag of The Hole. This world, this Doughnut World, poses unique opportunities and challenges for its inhabitants. These inhabitants include Hucklebaby, i, Pierrot, the tree, CRAVAT, and Popeye Squirm, all beings who ritualistically take over the life of the artist/the director/the poet.

The Doughnut World nurtures, among other things, tattoo culture, The Cockettes, baking, haute couture, 1970s glam rock, the Club Kids, and general self-indulgence in the process of curating queer decadence. Carefully cultivating these American queer community clichés while balancing the distinct voices of the various beings worked together to craft a dynamic view of this toroid planet; kitschy poetics create a world resisting the active physical destruction ever-threatened by merely existing on a doughnut-shaped planet. By cavorting with queerness to the fullest extents possible, the planet’s inhabitants effectively “rage” against their destruction. In a world suggesting caution, light steps, and peripheral lodging in order to extend survival, the inhabitants of the Doughnut World AND the Doughnut World resist death and minimalism, embracing decadence, erotic gluttony, and bodily hedonism in while fully recognizing their ultimate fates on a tenuous planetary body.

Jillian A. Fantin is a second year MFA candidate in Creative Writing concentrating in Poetry. They were the recipient of a 2021 Poet Fellowship from the Martha’s Vineyard Institute of Creative Writing, and they regularly collaborate with Chicago based mixed-media artist Kate Luther on interactive ekphrastic poetics for textile exhibitions. Jillian’s poetry has been published in The American Journal of Poetry, TIMBER, The Daily Drunk, Entropy, and elsewhere. So far this year, they have poetry from this manuscript and others forthcoming in wind up mice, Selcouth Station, and Homology Lit.