This annual award recognizes Gender Studies undergraduate majors or minors whose work in community-engaged service or activism outside the classroom best exemplifies gender-justice praxis—the linking of learning to social justice. The winner will have a strong record of leadership, activism, and/or service that is clearly grounded in their Gender Studies education. The award includes a prize of $100 and is conferred on a student or group of students each Spring. Winners are selected by the Gender Studies faculty and administrative staff. 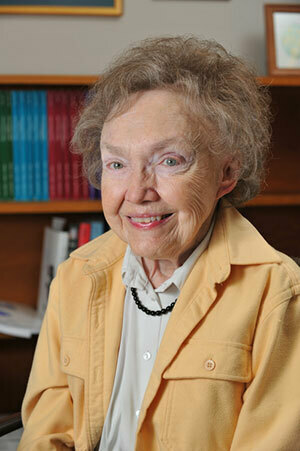 Joan Aldous (1926-2014) was the William R. Kenan, Jr., Professor of Sociology emerita at the University of Notre Dame. A renowned feminist sociologist, Dr. Aldous was the first woman to hold an endowed professorship at Notre Dame and a key player in establishing the Gender Studies Program in 1988.

A native of Washington, D.C., Aldous was 12 years old when her father died, and her suddenly widowed mother obtained an advanced degree from Columbia University, subsequently teaching home economics, child care and family relations at Kansas State University. Her mother’s difficult and, in those days, highly unconventional choice of a career path so affected Aldous that she ever afterward credited it as inspiration for her own somewhat groundbreaking career.

Aldous joined the Notre Dame sociology faculty as the William R. Kenan Jr. Professor of Sociology, thus becoming the University’s first female holder of an endowed professorship at a time when there were few women on the faculty. From 1976 until her retirement in 2012, she taught, studied and wrote about family sociology, family policy, gender, work and families and intergenerational relationships.